The season REALITY as it was planned and presented in February 2020 has been cancelled as per the regional order of 04/03/20. The season has been rescheduled as REALITY?.

You don’t want to do a philosophical analysis of realism, neo-realism, modernity and post-modernism.
Neither simplify an English word that by now has entered the common Italian vocabulary and sees Reality only and solely linked to show.

For us, Reality is simply, and perhaps trivially, the reality. That reality which keeps us anchored to the present day, to its observation, to its analysis, to its interpretation. It is the reality of the facts, the matter of reality, which we believe to exist despite the disorientation caused by the overload of information, despite the spread of “fake news”, despite shameless political propaganda that fears neither self-contradiction nor the explicit lie.

It is that reality that in 2018, with the rise of populist movements and a new form of power that disdained knowledge but was built on communication, made us think of Power. That same reality that the following year with Economy led us to turn our gaze to the economic world, its excesses and its distortions.

And it is always the reality that, at the end of the three-year period with Reality, takes the place of honour and, after two years of glossy and metaphorical images, invade with its power, as a quick overview of global reality. An overview that questions the meaning of the world and would like to be “cosmopolitan” following the thought of the German sociologist Ulrich Beck who spoke of the need for a “daily look, vigilant at history, reflective, which arises in an environment in which borders, differences and cultural contradictions vanish […] “.

GLOBAL, VIRTUAL and HUMAN are the three focuses that accompany the season, keys of interpretation to explore the current framework of contemporary society. Three focuses and not four as in previous years, to give more unity and coherence to the autumn programme and to allow a longer holding of some shows.

At the closing, not only of the year but also of the three-year period and of a path that until today has led us to invite the most representative names of that genre defined Theatre of reality, we will dedicate two days to a convention of reflection and discussion on how we view the future of the theatre in relation to the reality.

An important opportunity to take stock of the current situation in Europe but also to bring up new issues and questions. For the occasion, we’ll invite some of the artists we hosted over the years, and the representatives and critics that are the most sensitive to this topic.

The artists in residence during 2020 are:
Anna Serlenga (IT)
Guinea Pigs (IT)
Muna Mussie (IT)
Yan Duyvendak (CH)
Mats Staub (DE)
Michele Losi (IT)
+ the winner of the IntercettAzioni contest 2020 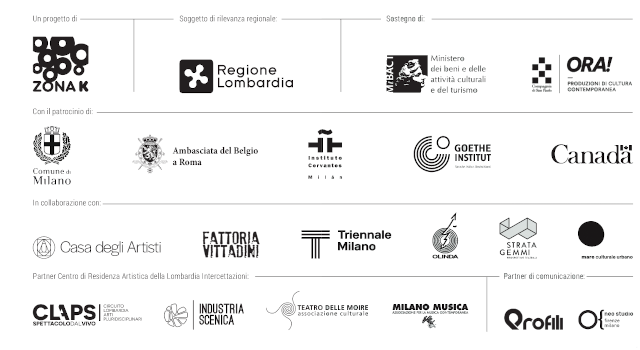