PLAY ME (Origins Project) is one of the winning projects of the call for tenders “ORA! Produzioni di cultura contemporanea” by Compagnia di San Paolo.

A button. A player. One screen.

PLAY ME (Origins Project) is a multimedia installation for a single spectator. A narrative short circuit from the origins of the videogame to the origins of the iGeneration. An interactive experience in which we meet today’s teenagers through the use of new technologies. A creative journey that tells of our identities (real and virtual) through the comparison between generations.

Here are the new barbarians.
The enemies to come.
Incomprehensible to the eyes of the adult world.

Adolescents, hyperconnected and fragile, terrified and attracted by the image of themselves on social media, experts in sexting, video-gaming and binge drinking, and owners of smartphones as an extension of their bodies.

Starting from the expectations and stereotypes we have about them seemed the best way to understand adults’ fears about the world to come. But what do we know (or what do we think we know) about today’s teenagers?

So we rediscovered the “new barbarians”: today, the real difference between US and THEM has become a generational difference rather than a geographical one. We have discovered why a teenager in Turin uses the same Nikes, the same behaviour and the same iPhone as a teenager in Marrakech or Barcelona.

Teenagers are the invaders of spaces incomprehensible to adults.

In this performance the spectator will find himself in relation to them.

They can choose to confirm or question their expectations, fears and prejudices. They will be able to do so thanks to a mode of “active presence” in which they will be invited to go through four “rooms” called Waiting Room, Chat Room, Virtual Room and Control Room. The ultimate goal will be a “performative game” to generate an unprecedented and intimate encounter.

PLAY ME (Origins Project) presents itself in conclusion as a performative project of “cinema truth”. We worked on what the sociologist Morin defines as “cinema of total authenticity” starting from the biographies of young people we met during the research and dramaturgical development phase between Turin and Milan and in the subsequent phases between La Spezia and Udine.

The work team involved various collaborators from different disciplines: from urban planning to theatre, from 3D animation to videomaking, from anthropology to dramaturgical collaboration with a group of Italian and foreign teenagers met as co-authors. Up to the supervision and dramaturgical consultancy of Agrupación Señor Serrano, winners of the Silver Lion for Innovation 2015 at the Venice Biennale, recognised on the European scene for the use of multimedia tools within performance events.

In each city where the project is hosted, workshops are held to create the performance involving teenagers in the role of Protagonists and using different tools such as video cameras, tablets, smartphones and Virtual Reality visors. All these elements become the tool for the construction of new stories that try to answer a simple question: what do we know (or what do we think we know) about today’s teenagers?

Multimedia installation with VR for single spectator – audience aged 15 and over – duration 30 min. – entrance every 15 min – in Italian
For information and booking write to organizzazione@zonak.it

“The project is realised with the support of the Compagnia di San Paolo within the framework of ORA! Produzioni di cultura contemporanea”. 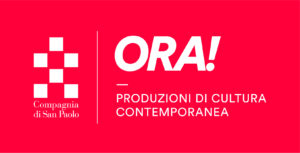