“Generazione gLocale” is an artistic production by ZONA K, an urban and participatory performance in which the new generations of multi-ethnic societies are given a voice. The project includes theatre workshops and the creation of an urban and interactive performance directed by Andrea Ciommiento under the supervision of the Catalan artist Roger Bernat.

In what context do we live? Are we in Milan, Toronto or Manila? Do we recognise and differentiate ourselves by where we come from or how we inhabit cities? How do we defend our local belonging in a world without borders? Audience and actors look at each other, move in the space, follow the instructions of a voice in the headphones. 150 people advance and retreat until they mingle or move further and further away. Is it a generational or ethnic issue?
A gLocal vision that appropriates the term introduced by the sociologist Bauman to indicate the phenomena resulting from the impact of globalisation on local realities and vice versa, and that narrates the dialogue between small communities and increasingly complex systems.

Each performance is a site & people specific version that comes from “participatory creation” workshops with a group of local young people who become the creators, creators and organisers of the project.

The protagonists of the first project were second-generation Milanese young people involved in the course from March to July 2017 in the role of creators and organisers of the project thanks to the support of the Cooperativa Diapason (Milan) as cultural mediators.

Part of the work was carried out within the Italian language courses for foreigners together with the Association of social promotion Asnada (Milan), integrating the vision of the chosen themes with that of those who have recently arrived in Italy and with citizens (Italian and not) who live in the metropolitan city on a daily basis.

The national debut of the performance took place on Sunday 30 July 2017  in the urban spaces of Castello Sforzesco thanks to the logistical support of the Culture Department of the City of Milan and the support of MigrArti 2017 by MiBACT.
The logistic and organisational partners were C.L.A.P. Spettacolo dal vivo (MI) and OLINDA (MI). 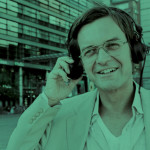 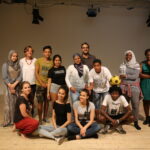